Coronavirus: What happens if I’m in an area on the watchlist?

Coronavirus: What are the new lockdown rules for Preston and other areas?

Coronavirus: What happens if I’m in an area on the watchlist? 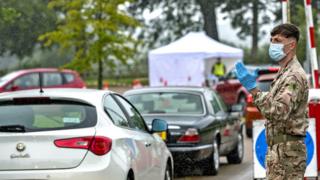 More than six million people in England live in areas on a Covid-19 watchlist, which could end in a tightened lockdown like in Leicester and parts of the north if coronavirus is not brought back under control. What happens if your town goes on the list?

Every week, Public Health England (PHE) publishes a list of areas it is concerned about based on new coronavirus infection rates and other local intelligence.

These places are categorised as either "areas of concern", "areas of enhanced support" or "areas of intervention".

The government has put Greater Manchester, parts of east Lancashire and West Yorkshire into the highest risk category, requiring the most support.

People have been told not to meet those from other households indoors or in private gardens.

In Leicester, the city stepped back into a stricter lockdown than the rest of England in July, with non-essential shops and businesses closed and travel restricted.

Luton and Blackburn were marked for intervention on 23 July and that meant gyms, pools, fitness and dance studios and other sports facilities remained closed, even though elsewhere in England they were allowed to reopen on 25 July.

And while Luton stepped down a rung on Friday, Blackburn is still in a tighter lockdown.

When Blackburn saw a spike in cases, officials introduced measures such as:

Council Leader Mohammed Khan said the authority was given support to increase testing, including home tests and tests for those with and without symptoms in the worst-affected areas.

But Mr Khan also said further testing capacity was needed, and had requested resources from the government to set up a new test centre in the area before it was moved up to "intervention".

Areas in this category receive extra resources, such as more mobile testing.

In Pendle, Lancashire, people were issued with stricter guidelines to the rest of England. On Friday it joined the eastern part of Lancashire, parts of Yorkshire and the whole of Greater Manchester in moving up to "intervention".

Luton and Oadby and Wigston moved down from intervention to enhanced support.

The Director of Public Health for Lancashire, Dr Sakthi Karunanithi, said being put in a higher risk category on the watchlist meant there had been extra support similar to that seen in higher risk areas.

This included the ability to test people with or without symptoms, extra testing kits and help analysing data by national experts.

"If these areas are going to be on the list for a long time, this needs to be compensated with the right level of resources," he said. "We're able to manage at the moment, but if more areas [in Lancashire] make the list then we will be asking for more support."

He said more resources would be needed to help test and trace efforts, supporting the community and businesses and communicating with people.

Areas of concern are those at the lowest end of PHE's watchlist, but will have some of the highest rates of new infection in the country.

In these cases the local council will take action. For example they might do more testing in care homes or work with communities they have identified as higher risk.

Under their existing Covid-19 powers, councils could close down a venue, such as a pub, but would not be able to order them all to close.

Sandwell Council was one of two areas, along with Eden in Cumbria, added to the watchlist on Friday after cases more than tripled over three weeks.

Its director of public health, Dr Lisa McNally, said it had already dealt with outbreaks, with an enhanced local test and trace programme and more direct involvement with businesses.

She added support from the national test and trace system had "failed" and the council was doing its own.

"We've been saying over and over again that when we get the daily data through on who has tested positive that we need names and workplaces," she said.

Dr McNally said the PHE data the council was sent had a column for occupation, but it was often either blank or limited to things like "engineer", "healthcare" or even simply "citizen", rather than containing the information about where the person worked.

She said language barriers were one of the main problems with test and trace in areas where English was not the first language of large numbers of people, so staff who speak other languages had been redeployed to help.

Coming off the list does not mean it is all over.

Oldham, which this week recorded the biggest surge in new cases in the country, was an area of concern a fortnight ago only to be removed last week as cases started to rise.

Now the area is back on it at the highest alert level.

Sheffield came off the list of concern last week. Public health bosses said that meant they were classed as "business as usual".

"If cases rise in Sheffield and we meet the criteria for one of the other three categories, we would expect to be re-categorised accordingly," a spokeswoman said.

Barnsley in Yorkshire was on the list but came off it on 23 July after the number of new infections fell.

Julia Burrows, director of public health, said the area now had a better chance of getting on top of the spread of the virus, thanks to the additional testing.

The area would "definitely not" be easing up, however.

"The virus is still with us and will be for the foreseeable future," she said. "We continue to urge adherence to the guidance, to make sure we continue to prevent transmission of the virus, so we don't start to see infection rates creeping up again."

A spokeswoman for the Department of Health and Social Care said: "As demonstrated in Leicester, we will take all necessary steps to stop the spread of the virus and we continue to urge the public to play their part by following government guidance."

Launched in January 2009, Our business is community focussed radio broadcasting where we provide quality entertainment to all our listeners across the city of Leicester, here in the East Midlands.